Shifu Browne is the Chief Instructor at Shaolin Daolu and is a 34 Generation Shaolin Warrior disciple of shaolin Temple in China.
Shifu Browne is the disciple of Shifu Shi Yan Zi, and a direct disciple of the Abbott Shi Yong Xin (Shaolin Temple China). Shifu Browne has a very long and rooted legacy in kungfu and has worked very hard over the years to spread Shaolin/ Chan Culture throughout the UK and abroad. Shifu Browne studied kungfu fu from a very early age and at the tender age of 9 years old, achieved his first black belt in Taekwondo and was at the time one of the youngest black bets in the British aisles.

Shifu Browne went on to study many forms of martial arts i.e. Wing chung, karate, judo, kickboxing, and Tai Chi, and was lucky to be taught by some of the greatest teachers alive today i.e. Master Wu Bin (teacher of jet lei the film star, head coach of the Beijing wushu team), shifu Shi Yan Li (Shaolin Temple) Grandmaster Guolin, Shaolin Temple USA) Master Chen Zhenglei (Chen Tai Chi family), and many more. At the age of 18 shifu Browne travelled to Shaolin Temple in China to for fill his dreams and was taken under the wing of some of the greatest masters in Shaolin Temple and resided there for over 3 years. Shifu Browne majored in Shaolin Steel Jacket, Sanda, Chen Tai Chi/Shaolin soft fist (Roe Quan), Traditional Shaolin forms/Taolu and Chi Gong. Shifu Browne has been teaching for over 25 years and is very well received and respect in the world of martial arts Masters.

Shifu Browne has taught and cultivated a large number of students over the years and lifted them to a very high standard, some of which now have their own schools and are Masters / coaches in their own right, with shifu Browne as there foundation and guide. Shifu Browne is solely responsible for the migration of all traditional Shaolin Monks that are currently residing in the UK and as spent a lot of time, energy, money and great effort in bringing Traditional shaolin Monks to teach and perform in the UK. 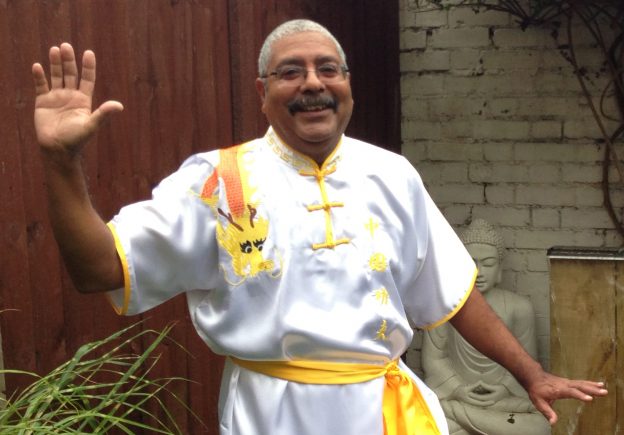 Aaron has been studying Tai Chi with Shifu Browne since 2009. Shifu Browne is a 34th Generation warrior disciple of Shaolin Temple China and studied there for many years. Aaron has been teaching Tai Chi since 2012 and teaches 3 regular classes a week as well as special sessions for older people. He has experience of Chen, Yang and Wudang Tai Chi and is proficient with stick, broadsword, straight sword, fan and ball techniques. He has a good knowledge of Qi and Qi Gong and is passionate about Tai Chi and Chinese culture.